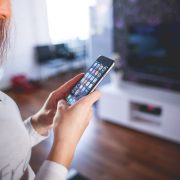 These days, we can do everything with our smartphones. We can check the weather, see what traffic is like at 7am, search for products we want to buy online, and take great quality photos. And now, thanks to advancements in technology, our smartphones can also be mobile wallets.

Mobile payment is an amazing global phenomenon. When we physically shop in places that offer contactless payments (payWave), it eliminates the need for bringing wallets and pulling out cards. To pay with your phone, you simply tap it close to an EFTPOS terminal, as you normally would with a payWave card, and voila – payment made! It’s as easy as that. Not having to carry cards around also increases payment securities, no need to worry about losing your card or having your numbers exposed for the world to see – your smartphone takes care of all of that.

Despite this dream of a wallet-free life in New Zealand being so close, we are still very far from achieving it. Even Apple, one of the biggest smartphone brands in the country, still hasn’t quite taken off the ground as much as it already should have in terms of mobile payments. Similar to other providers, its mobile payment solution Apple Pay lets you enter your card details in, turning iPhones magically into mobile wallets. However, despite having such a convenient technology available at the fingertips of Apple users nationwide, New Zealand just doesn’t care about Apple Pay … yet.

Here are the reasons why NZ isn’t using Apple Pay:

Shockingly, there are only two banks in New Zealand that support Apple Pay: ANZ and BNZ. ANZ was at the forefront of the Apple Pay roll-out in 2016, making it available to customers with Visa credit or debit cards issued by the bank. For a year, ANZ was the only bank that offered Apple Pay, until BNZ followed suit very recently in October this year to reinforce its initial service Android Pay. ASB and Westpac also have their own mobile payment apps for smartphones, not wanting to rely on the big brands to provide the same service.

With such a limited number of banks (only two!) supporting Apple Pay, it’s no surprise NZ hasn’t caught on quite yet.

Not every Kiwi owns an iPhone. There are many other smartphone brands available in the market, and most of them are cheaper alternatives. In the last quarter of 2016, Apple owned 31% of the vendor share for smartphone shipments to NZ, followed by Samsung, Huawei, Vodafone, Spark, and many others. Since then, its contenders haven’t been sleeping – Samsung released its powerful Samsung 8, Google released Google Pixel, among many other great smartphone releases in the industry as of late. With every year the smartphone competition is only getting more and more intense, potentially decreasing Apple’s market share overall. From here on out, Apple will have to really step up its game to win the hearts of Kiwis across the country.

Mobile payment is not an easily navigable industry, with surcharges and app royalties making the process hard for both banks and businesses to fully commit to any one software like Apple Pay. However, with an increasing number of locations offering payWave technology, and as more Kiwis start relying on their smartphones for virtually everything, New Zealand may well be on its way to leaving their wallets at home.

Get ahead in the industry and make sure your EFTPOS machine has the technology that supports mobile payments such as Apple Pay! Contact the experts here at POSCOM for the best updates and POS technical support!